Who Is The Most Innovative Nation In The World?

We live in a competitive world, so it’s perhaps no surprise that league tables exist for pretty much anything that can be quantified. Innovation is no exception, and perhaps the most well known league table is the Global Innovation Index (GII) that’s produced each year by INSEAD, WIPO and Cornell University.

The 2018 version was published recently, with Switzerland continuing its dominance, topping the charts for the 8th year in a row. Their persistent presence at the top of the index underlines the enduring nature of many of the elements that underpin successful innovation in a country. These include access to finance, a strong legal system, exceptional schools and universities, and high investment in research and development. These are all elements that are measured by the researchers as they compile the index, alongside various innovation outputs, including the number of patents, startups and academic papers.

The second noticeable aspect of the 2018 Index was the domination of European countries. 6 of the top 10 nations are European, with 4 of the top 5. This highlights the strength of the continent, despite long standing concerns about translating clear academic and scientific clout into new startups.

Not to be outdone, the European Commision have attempted their own version of the Innovation Index, with a league table they refer to as the European Innovation Scorecard. Obviously, with the report being compiled by the European Commission, Switzerland is helpfully (for the other nations) excluded from the running, which left Sweden flying the flag as the most innovative nation in the EU. The Scandinavian country, who were 3rd in the GII, came top on account of the innovation friendly environment and strong talent development infrastructure in the country.

Carlos Moedas, Commissioner for Research, Science and Innovation, said: “This edition of the Scoreboard shows yet again that Europe is strong in science but underperforming on innovation. The renewed agenda for research and innovation sets out a range of measures for Europe to become a global innovation leader. Our proposals for Horizon Europe, the next EU research and innovation programme, will accelerate innovation along the full value chain and support the identification and scale-up of breakthrough innovations.”

The report also chimes with the GII in showcasing the general growth of innovation capability across Europe. It reveals that most EU countries have progressed in relation to global competitors, including the United States and Japan, whilst maintaining a lead over China.

One country that does better than most at converting scientific knowledge into startups is the United Kingdom. A recent European Union policy briefing highlighted what sets the UK apart from many of its peers in Europe, not least Germany, whose ranking was let down by their poor performance on growing startups.

The paper identifies the liberalized markets, robust financial instruments, strong knowledge creation and the powerful intellectual policy framework that is present in the UK as being the core drivers of startup success. 14 distinct pillars of entrepreneurship were identified, with the UK scoring highly on many of them in relation to their EU peers. Nonetheless, despite the strengths in the UK, they still struggle to support startups in scaling up, especially overseas, and this may continue depending on the outcome of Brexit negotiations.

They have particular strengths in terms of higher education and the access to leading talent this provides them however. Despite this strength, the paper believes there is insufficient effort given to encourage students and researchers to stay in the UK after their studies have concluded.

While league tables such as these inevitably simplify innovation in order to enable the ranking of nations, they do nonetheless provide an interesting and visual way of seeing how countries perform across a range of indices that are crucial to supporting and growing innovation. In a follow up post, we will explore which cities are doing best in their support of innovation. 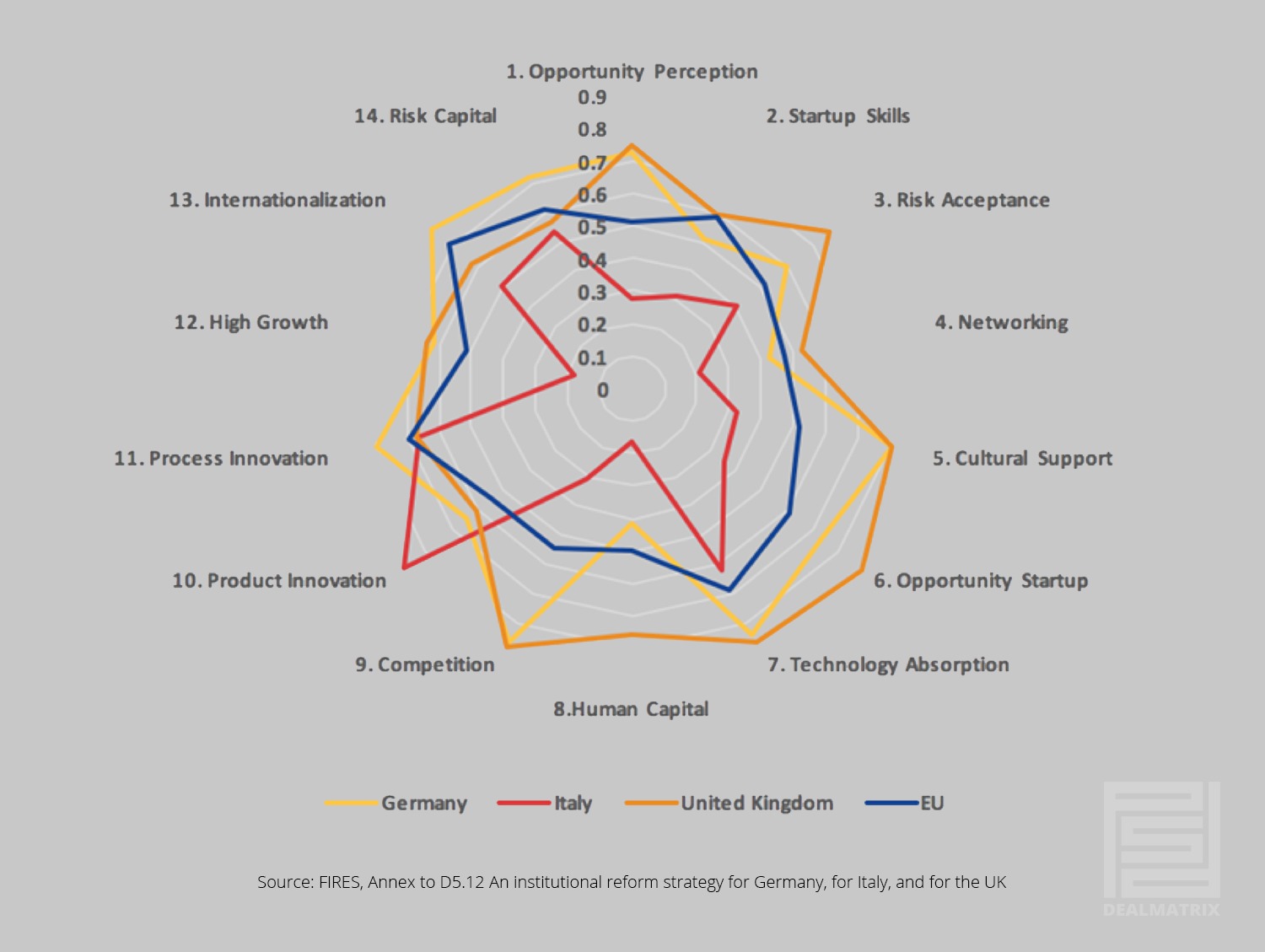 Sign up to get our latest news, updates and special offers available right in your inbox.