The third quarter of 2021 has come to an end, and we are thrilled to sum up the results of these three months. By analysing both Deals Monitor and Crunchbase we aimed to find out whether this quarter was as impressive as Q2. To do so, we have had a look at the most spectacular rounds closed in Europe, the most promising industries and striving startup hubs.

To be aware of the latest deals, subscribe to our newsletter and receive the most relevant information regularly via email!

Without further ado, let’s see how the Investment Deals Activity in Q3 has evolved.

As one would expect, the largest number of deals took place in seed rounds.  Overall, 18.2% out of all funding rounds were allocated to Pre-Seed rounds, followed by 35.1% Seed rounds, 12.1% Series A with the rest of the share consisting of later rounds. It should be noted that information about Seed rounds tends to lag behind, thus we expect seed rounds to make up more than stated at this moment.

Leading Industries by number of deals

It might come as no surprise that the Software industry is still the absolute leader in both number of deals and the funding volume. FinTech funding closely follows suit, RetailTech trailing closely behind. One surprising sector is the Healthcare sector, which shows lesser deals being made as well as a halving in a total amount of funding obtained. It should be noted that Q2 of 2021 was an extreme outlier when compared to previous quarters, however other regions around the world are showing an increase in this sector.

The UK keeps its strong position in the startup hubs arena. One of the most remarkable London-based startup Revolute has raised $800 million in Series E round. The company specializes in mobile banking and foreign exchanges.

Germany and France have started to attract greater capital for their mega-deals. The Netherlands and Sweden are perceived to be promising startup hubs, which are hosting more and more innovative businesses each month. 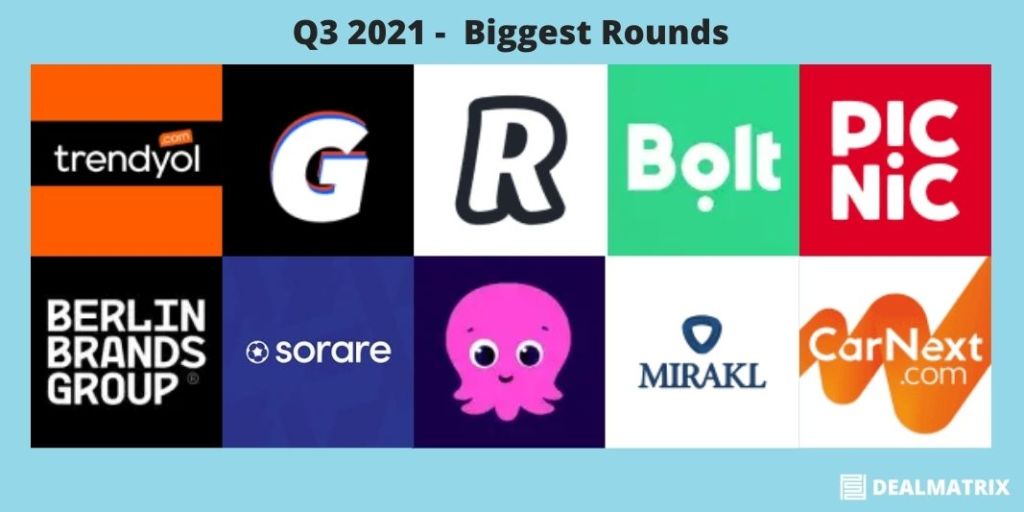 Turkey’s e-commerce platform has received $1.5 billion in the private equity round. The company is the first to receive a decacorn status in Turkey. The current valuation of Trendyol accounts for $16.5 billion. The capital gain is going to be spent on global expansion, as well as within the country.

Berlin-based grocery delivery startup has secured $950 million in Series C financing round. The post-money valuation has reached $3 billion after this investment. The cash received will be used for acceleration in Europe, especially in France and Spain.

The British fintech startup has closed Series E round with $800 million. The company is now being valued at $33.2 billion. According to Techcrunch, the acquired investments will go on expansion in the U.S. and India, as well as on adding new innovative features to the Revolut App.

Tallinn-based mobility company has raised $693.5 million in Series E round. This investment pushed the startup’s valuation to $4.6 billion. Bolt aims to become a multifunction transport app that includes mobility services like a scooter, taxi or bike, and food delivery.

The Dutch online grocery service has received $693.5 million of funding in the Series D financing round. Picnic is delivering groceries directly from the distribution centres to the doorsteps. The company intends to invest in expansion to Germany and France. It also aims to make its fulfilment centres more efficient and increase the use of electric vehicles.

Berlin-based e-commerce startup has secured $700 million in a private equity round. After this deal, the company gained unicorn status. The raised capital is going to be used in tech platform expansion and international logistics network improvement.

Fantasy football platform Sorare raised $680 million in a Series B funding round, giving it a valuation of $4.3 billion. The company intends to use the funds to accelerate growth within the football vertical, but also expands its offering into other sports sectors.

London-based energy technology startup has closed Series A round with $655 million funding. The cash will be spent on the fulfilment of the startup’s mission: promotion of renewables and sustainable technology to end the reliance on fossil fuels.

The French marketplace platform has secured $555 million in a Series E funding round. The post-money valuation reached $3.5 billion. The company intends to use the funds to enlarge engineering and customer success teams.

Europe’s leading used-car marketplace has raised $462.3 million to accelerate its growth across the European countries. Previously the startup was a part of the LeasePlan company, but since 2021 it has become an independent business. CarNext administrates used-car transactions between B2C and B2B customers.

Add the DealMatrix Deals Monitor to your bookmarks, to keep track of the latest deals announcements!

The investment landscape seems to be thriving, even though the total amount of funding and the number of deals has decreased from last quarters all-time high. So far , the total amount of funding in 2021 has already significantly exceeded 2020. Furthermore, we can see that the European start-up environment is maturing, with countries like France and Germany showing promising growth, with the UK keeping its top spot as the European start-up hub.