According to Deals Monitor, August was THE month of deal announcements coming from the UK and Germany. These two European countries show a considerable success record of deals, with Austria being right behind them, in third place.

Speaking of industries, FinTech beats all other sectors. Far behind in second and third place are Artificial Intelligence and E-Commerce.

The majority of the deals is distributed between Series A and Series B rounds with 18,7 million up to 50 million averages, respectively. 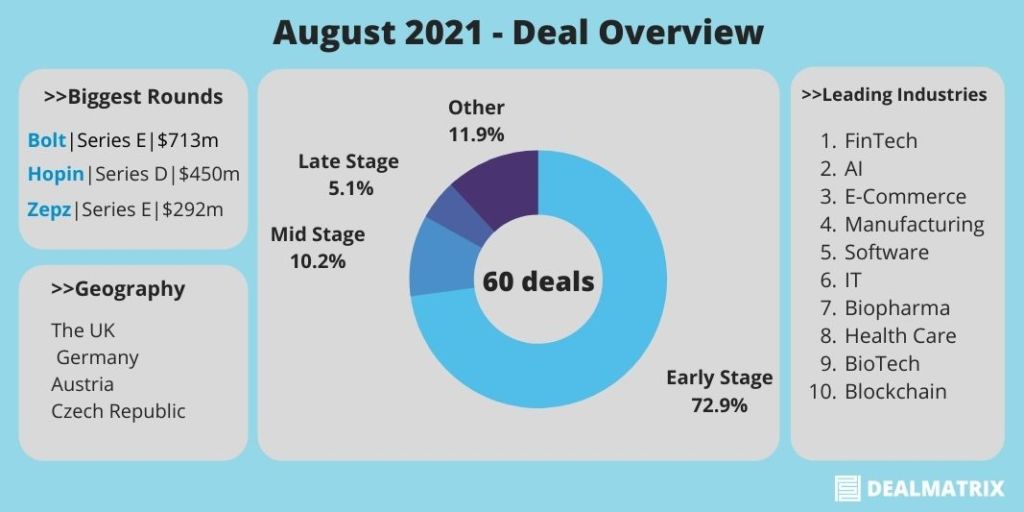 The largest deal in August was Bolt with a $713 million funding in a Series E round.

If you want to keep up with the most recent deals in Europe, check the Deals Monitor regularly!

The Estonian transportation startup Bolt has raised $713 million in a Series E. The company aims to use the funds to develop the new grocery delivery service, Bolt Market. Also, it intends to improve the existing mobility and delivery products.

The British virtual conference provider Hopin receives $450 million in Series D funding round. The two-year-old company is going to spend the funds raised on the acceleration of its expansion and development of future offerings.

Zepz, formerly known as WorldRemit Group, has raised $292 million in a Series E round. The cross-border payment platform is now valued at $5 billion. The funding will be used to enhance deeper market penetration and to expand to new markets. Zepz is ready to offer some additional value-added services to its customers.

Austria’s first unicorn has closed $263 million in a Series C financing round. The startup is now valued at $4.1 billion that is 3x more than its previous valuation. Newly received funding will be spent on scaling the business and international expansion.

The Berlin-based virtual survey and interview platform nabs $150 million for its geographical expansion. Atheneum offers research as a service that helps companies outsource the process of information mining. The company is also determined to boost its hiring and build out technology with raised funds.

A global digital marketplace from Germany Chrono24 has raised $118 million in Series C financing. The company has created a marketplace for new and used luxury watches. The new investment will go for growth acceleration, international scaling, and presence deepening.

The German aggregator of Amazon e-commerce businesses has raised $118 million in a Series B financing round. The company buys and builds Amazon businesses. This way, it helps entrepreneurs decide on how the next stage will look like.  According to the co-founder Philipp Triebel, the money raised is equity that will help raise further debt and enlarge the existing portfolio with new Amazon sellers.

The Berlin-based therapeutics company T-knife announces it has raised $110 million in Series B financing round. The company develops innovative therapeutics for tumour patients. The received investment is going to be spent on the expansion of the scientific team, improvement of manufacturing capacity and advancement of the therapies.

The British marketplace SaaS platform Plentific raises $100 million in Series C. The company offers a cloud platform for property management. Plentific intends to use the money raised for global expansion and to increase the current presence on the market.

Fintech and AI sectors caught the most investor’s attention in August. Although the UK brings us most of the deals, Germany has performed almost as good this month. We have also seen two Austrian startups in the list of Top 10 European deals in August, Adverity and Bitpanda. We will keep an eye on the future startup news to share them with you in this monthly blog category.

Don’t forget to register on DealMatrix to make your startup valuation easier!